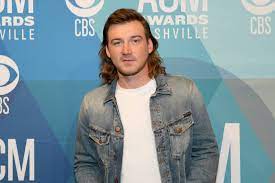 American star Morgan Wallen has been removed from more than 400 American radio playlists after his racist video was published.

In footage allegedly filmed by a neighbor last weekend, the 27-year-old can be seen saying goodbye to his friends and calling one of them the N-word.

The Nashville star, whose latest album has been number one in the United States for three weeks, apologized.

“I’m embarrassed and sorry,” he told TMZ, which released the video for the first time.

There are never excuses for this type of language. I sincerely apologize for using this word. I promise to do better.”

Wallen, whose career began on the American version of the television show The Voice, is currently one of America’s biggest country stars.

His latest album, Dangerous: The Double Album, is the first country album to reach # 1 on the Billboard charts in three weeks since Taylor Swift’s Red in 2012.

However, one of the largest radio stations in the United States, Cumulus Media, has distanced itself from the star.

A statement to more than 400 radio stations said, “It is effective immediately, we request that all Morgan Wallen songs be removed from our playlist.

Wallen Music also seems to have been removed from the Hot Country Spotify playlist as well as Apple Music, Today Local.

“There is no place for you”

Such a move is important because Dangerous has been a rare hit in streaming, according to MRC Data, which compiles the US charts.

Some of Wallen’s fellow musicians, including Kelsea Ballerini and Mickey Guyton, criticized him on Twitter.

This isn’t the first time Wallen has gotten into trouble. In May he was arrested and charged with public drunkenness after being kicked out of the Kid Rock Bar in Nashville.

In October, he was banned from an episode of Saturday Night live after a video surfaced showing him breaking Covid-19 rules by partying with fans without wearing a mask or during a football game to use social distancing.

The star’s current single, 7 summers, was on the BBC Radio 2 playlist for four weeks, but its rotation ended as planned on Wednesday.