T20 World Cup: Ireland’s six-wicket victory against Scotland keeps them in the race for Super 12s, thanks to Campher and Dockrell. 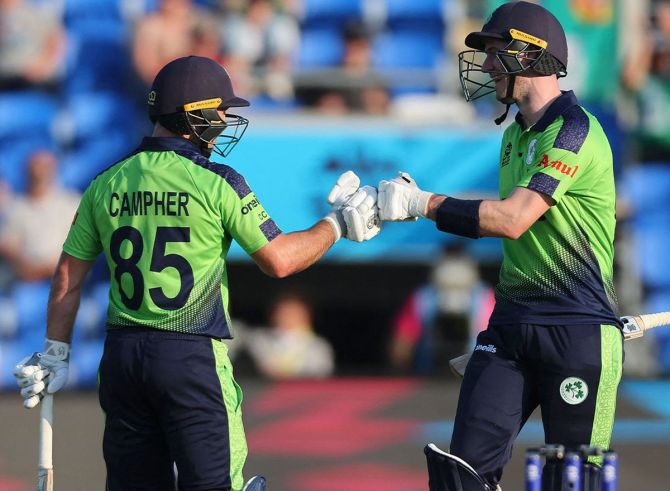 In Ireland’s come-from-behind six-wicket victory against Scotland in their Group B encounter of the opening round of the ICC Men’s T20 World Cup on Wednesday at Bellerive Oval, Curtis Campher and George Dockrell shared an unbroken 119-run partnership for the fifth wicket.

In only 9.3 overs and with a superb partnership, Campher (72 not out off 37 balls) and Dockrell (39 not out off 27 balls) helped Ireland defeat Scotland and remain in the running for a Super 12 position.

The pair produced runs in double digits until Campher completed the chase with a hat-trick of fours, the last of which was a neat square drive beyond a point and yelled in excitement over securing a dramatic victory for Ireland.

Paul Stirling and skipper Andy Balbirnie both scored boundaries in the opening three overs of the chase, making them stand out. However, the pair failed to advance, losing to Safyaan Sharif and Brad Wheal’s quick bowling in the power play.

Then, spinners Mark Watt and Chris Greaves took over, dismissing openers Lorcan Tucker (20) and Harry Tector (14) just as they were about to turn their promising innings into something meaningful.

Ireland had fresh batsmen, Campher and Dockrell, and 116 runs remained to be scored in 63 deliveries when the drinks break was taken. Following two boundaries from Wheal and Greaves for Dockrell, Campher joined the celebration by slog-sweeping Watt for six in an 18-run 13th over that also contained four wides.

Seven of Campher’s nine boundaries came from the square of the wicket zones on both sides of the stadium, where it is short and square, and Dockrell helped him out nicely.

While leading Ireland to their most successful run chase in T20 World Cup history, Campher also made good use of the crease, heaving, scooping, cutting, and slicing for boundaries.