Rare new images of a baby boy and his sister Stormi wearing identical shoes have been shared by Kylie Jenner. 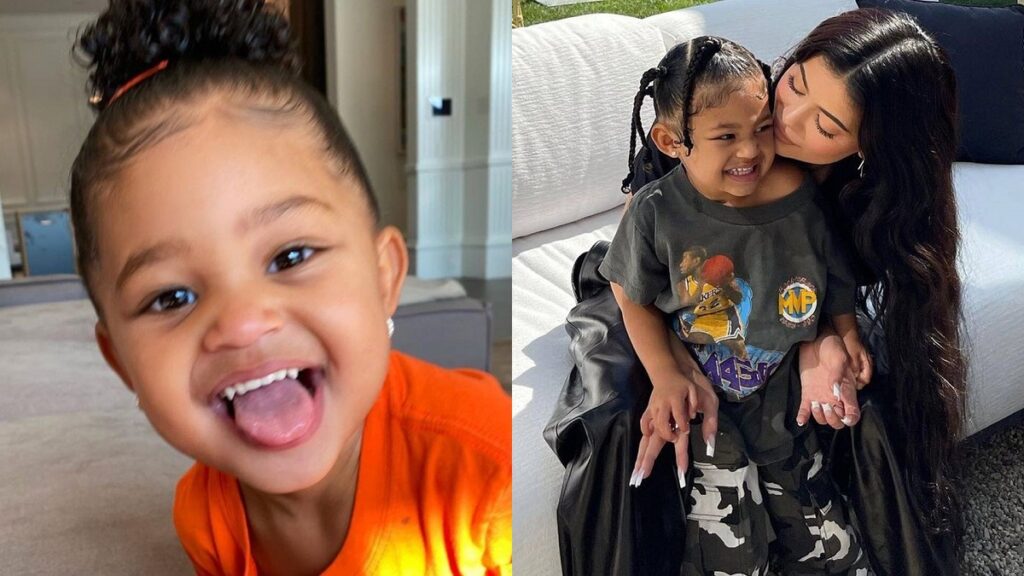 Fans now have a brand-new picture of Kylie Jenner’s newborn son to enjoy! I suppose a portion of him. On October 5, the 25-year-old beauty mogul posted a slideshow of photos on Instagram of her life since getting back from Milan Fashion Week, one of which was of her little son sporting identical Nikes to his elder sister Stormi, 4, in the picture. It appeared as though the infant son of Kylie Jenner and Travis Scott was standing in front of Stormi in the adorable photo, which only revealed their feet. With red laces and various brown accents, their matching sneakers looked sharp.

A bikini-clad Kylie leaned over her young son while lounging by the pool. He was resting on his back and she seemed to be chatting to him or making expressions at him, even though her arm is covering most of her face. Kylie’s left thigh was covered by his cute tiny right leg.

Similar adorable pictures of Kylie’s newborn son, who she gave birth to in February, have already been posted on Instagram. For instance, the creator of Kylie Skin posted a photo of her son’s little feet in May when he was using a Fisher-Price walker. A picture of Stormi’s legs was displayed next to the infant who was not wearing shoes. The happy mother commented above the photo, “I made these little feet.

Several months later, she showcased her baby’s gorgeous feet and legs on Instagram once more to advertise her Kylie Baby Soothing Balm and Lip & Cheek Stick. As Stormi independently applied the lip and cheek stick to her face like the independent big girl she is, she applied the balm to the legs of her infant son.

In the carousel Kylie released on October 5, Stormi appeared in a few solo pictures. In one of them, she was clutching a handbag with a bat design, and in another, she was grinning widely while petting a white horse. In other images, a festive pumpkin display and a “Welcome Home” banner that looked to have been made by Stormi were displayed. With the word “Home” and two butterfly emojis, Kylie captioned the slideshow.

While Kylie’s admirers were happy to see the update on her life, they asked when they will find out the name of her second kid in the comments section. Less than ten days after giving birth on February 2, Kylie revealed the name of her baby, Wolf.

But Kylie said that by the middle of March, his name had changed to Wolf. As of the time of writing, she hasn’t disclosed the new name. Kylie stated in April that she was “not ready” to share the new name of her kid. I don’t want to announce a new name and change it again, she said, adding that we haven’t totally changed it legally or anything. We simply aren’t ready to announce a new name just yet, so, yes.